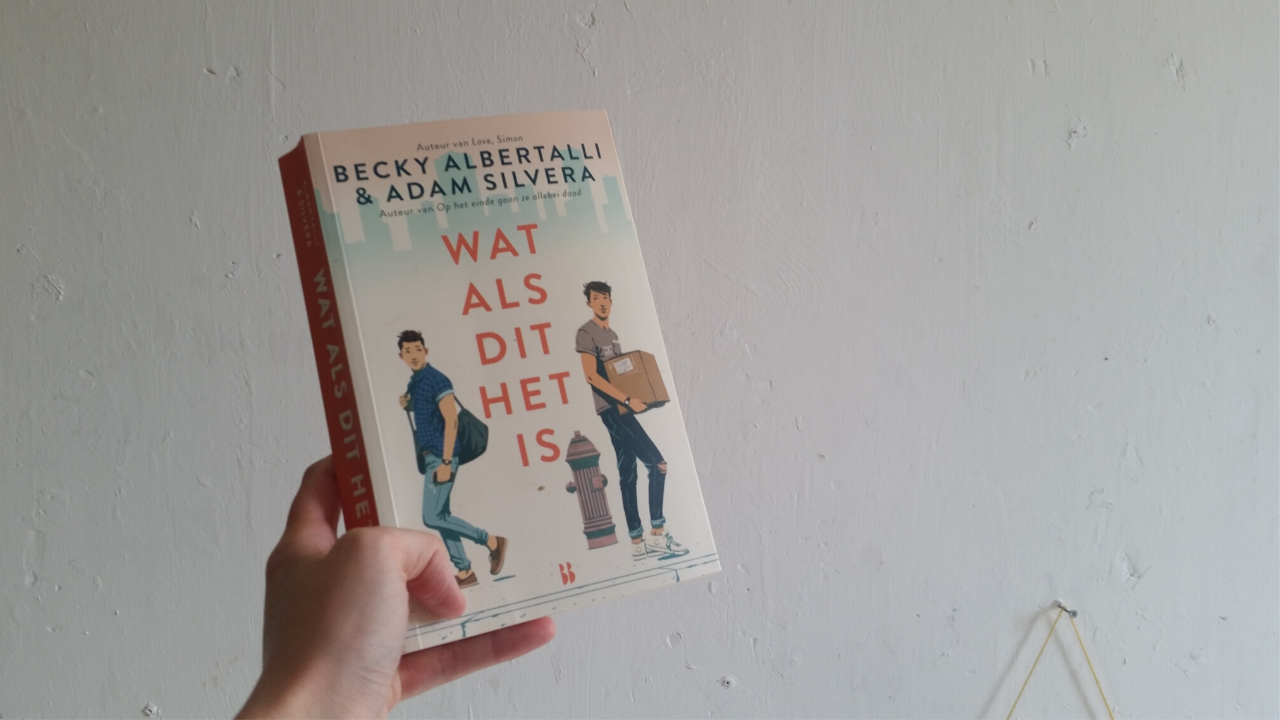 View on Amazon or view on Book Depository

What if it’s us

ARTHUR is only in New York for the summer, but if Broadway has taught him anything, it’s that the universe can deliver a showstopping romance when you least expect it.

BEN thinks the universe needs to mind its business. If the universe had his back, he wouldn’t be on his way to the post office carrying a box of his ex-boyfriend’s things.

But when Arthur and Ben meet-cute at the post office, what exactly does the universe have in store for them . . . ?

Maybe nothing. After all, they get separated.

Maybe everything. After all, they get reunited.

But what if they can’t nail a first date even after three do-overs?

What if Arthur tries too hard to make it work and Ben doesn’t try hard enough?

What if life really isn’t like a Broadway play?

But what if it is?

I picked this book up the other day as a birthday present to myself. And honestly, I couldn’t wait to read this book. I already knew Becky Albertalli because of her other book called ‘Simon vs homosapiens agenda’ also known as ‘Love, Simon’. Which is also a movie now. And I loved that one so I definitely had high hopes and expectations for this book too.

And yes, I loved it too. I had no idea what kind of writer Adam Silvera was, but I liked his part too. Becky is Arthur and Adam is Ben in this book. Two different writers. I mean, Becky writes about romance and Adam has a book called ‘they both die at the end’ and that doesn’t sound very cheerful, to be honest. But I really liked it.

Arthur is still waiting for his first love and dates, which makes it super cute and brings all the memories about my first date etc. Maybe Arthur is trying too much though, especially at organizing date with Ben. But he wants it to be perfect. And I really liked the part when they meet for the first time and how they find each other again.

Ben is the more experienced guy and he just dumped his ex and is not sure if he is ready for a new relationship and he also doesn’t know if this is going to work out because Arthur is in New York for the summer. After the summer is going back, far away.

This book consists out of 3 parts: before they start dating, during their dates, and after the summer when Arthur doesn’t live in NY anymore. And I have to admit that I thought that maybe Arthur would stay in New York but he doesn’t. So I was a little bit sad.

But honestly, I think this book is a good representation of dating really is. I mean, there are so many books that make sound dating so easy and effortless, but sometimes it is just messy. Awkward things happen or misunderstandings. That is just part of life. So no matter if you are gay/lesbian or straight, I think this book is for everyone. Dating in most movies and books always looks so amazing. And it can be, but it can also be a little bit awkward sometimes.

I would definitely recommend this book if you are looking for a romance/young adult book with a more realistic view of dating.