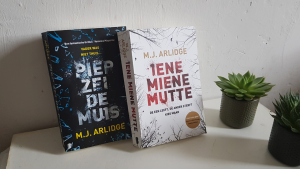 If you have absolutely no idea what I am talking about. Helen Grace series is a book series by M.J. Arlidge. And they are extremely popular under thriller lovers. Warning: the books are very detailed, so it might not be for everyone.

The girl emerged from the woods, barely alive. Her story was beyond belief. But it was true. Every dreadful word of it.
Days later, another desperate escapee is found – and a pattern is emerging. Pairs of victims are being abducted, imprisoned then faced with a terrible choice: kill or be killed.
Would you rather lose your life or lose your mind?
Detective Inspector Helen Grace has faced down her own demons on her rise to the top. As she leads the investigation to hunt down this unseen monster, she learns that it may be the survivors – living calling cards – who hold the key to the case. And unless she succeeds, more innocents will die . .

A man’s body is found in an empty house.
A gruesome memento of his murder is sent to his wife and children.

He is the first victim, and Detective Helen Grace knows he will not be the last. But why would a happily married man be this far from home in the dead of night? The media call it Jack the Ripper in reverse: a serial killer preying on family men who lead hidden double lives. Helen can sense the fury behind the murders. But what she cannot possibly predict is how volatile this killer is–or what is waiting for her at the end of the chase….

Read my book review of Pop goes the weasel

A young woman wakes up in a cold, dark cellar, with no idea how she got there or who her kidnapper is. So begins her terrible nightmare.

Nearby, the body of another young woman is discovered buried on a remote beach. But the dead girl was never reported missing – her estranged family having received regular texts from her over the years. Someone has been keeping her alive from beyond the grave.
For Detective Inspector Helen Grace it’s chilling evidence that she’s searching for a monster who is not just twisted but also clever and resourceful – a predator who’s killed before.
And as Helen struggles to understand the killer’s motivation, she begins to realize that she’s in a desperate race against time

In the dead of night, three raging fires light up the city skies. It’s more than a tragic coincidence. For DI Helen Grace the flames announce the arrival of an evil she has never encountered before.

Because this is no firestarter seeking sick thrills, but something more chilling: a series of careful, calculating acts of murder.

But why were the victims chosen? What’s driving the killer? And who will be next?

There are some fates worse than death . . .

Called to a Southampton nightclub, Detective Inspector Helen Grace cuts the duct tape from the asphyxiated victim and discovers she knows him.

A man from the double life she has concealed from her superiors, Helen is determined to find his murderer – while keeping their relationship hidden at all costs.

When a new victim is found, Helen works around the clock to stop her life unravelling. She’ll do anything to solve this case – but dare she reveal her own darkest secrets and lose everything?

Behind the badge. Behind her reputation as one of the country’s best detectives. Until – framed for murder – she became one of its most high-profile prisoners. Now there is nowhere to run. Nowhere to hide.

Because HMP Holloway is a place of dark days and long nights with dangers at every turn. Despised by the inmates and reviled by the guards, Helen must face her nightmare alone. And then a carefully mutilated body is found in a locked cell. Now Helen must find a ruthless serial killer. Before the killer finds her.

A blood-red sunrise
Just after 7 AM DI Helen Grace stumbles on a dead woman lying in a country road. She has been brutally shot for no apparent reason.

Two hours later
At gunpoint a shopkeeper is forced to close up by two assailants. Before the police can get inside a single gunshot rings out.

A rampage of revenge?
Over one long day the town of Southampton is terrorized by two young killers who appear to be killing at random.

Down to the woods

The last thing Tom Campbell remembers is camping in the New Forest with his girlfriend, Melissa. Helpless, alone and consumed by fear, he is hunted through the woods by a sinister, masked figure…

When Tom’s body is found, displayed with grisly relish, Helen Grace takes the case. But before she can catch her breath, a second victim is taken – it seems there’s a serial killer on the loose.

Something dark and deadly stalks the forest. Helen and her team must race against time to catch the perpetrator, before more blood is shed.

“You have one hour to live.”

Those are the only words on the phone call. Then they hang up. Surely, a prank? A mistake? A wrong number? Anything but the chilling truth… That someone is watching, waiting, working to take your life in one hour.

The job of finding out falls to DI Helen Grace: a woman with a track record in hunting killers. However, this is A case where the killer seems to always be one step ahead of the police and the victims.

With no motive, no leads, no clues – nothing but pure fear – an hour can last a lifetime…